After leaving high school John worked for and operated a gas station along M-78, near Perry.  He entered the US Marine Corps in 1941.

FIELD - Pfc. John F. Field, son of Henry A. Field, Okemos, R. 1, is spending a 30-day leave with his father.  He will return to Chicago, Ill. following his leave.  Prior to entering the marine service in April, 1941, Private Field owned and operated a gas station near Perry.  He received his basic training at Parris Island, S.C., and has served in five major battles in the Pacific area.

Note: In the following article the surname Field is spelled plural, "Fields."  Also, the writer identified the Christmas gathering to be at the home of "Mr. and Mrs. Henry Fields."  Nellie Field had succumbed to diabetes in 1940.  Mr. Field, Henry Field, did not remarry.  Henry died only days after the publication of this article, 24 December 1943.

Robert and John Fields are going to have a Merry Christmas at the home of their parents, Mr. and Mrs. Henry Fields, 2900 Risdale street, and they probably will spend a portion of the holiday relating their experiences since the last Yuletide season.

Robert is a sailor and John is a marine.  Last Christmas they were in the steaming Solomons area of the Pacific battling Japs.

In the 12 months that have elapsed since that time John was sent to New Zealand to recover from an attack of malaria and while there married a New Zealand girl.  Both boys, who had fought within a few miles of each other but had never met, finally were reunited at San Francisco in November 30 of this year and when their boats docked there both came home on leave and furlough which will end December 31.

On that date John will return to Great Lakes naval training station in Chicago to enter the United States naval hospital for further treatment for malaria and Robert will report to his ship on the west coast.

As far as is known Private Fields of the marines is one of the first Lansing men to take a bride in foreign lands.  She was Miss Pauleen Gould, daughter of a court official in the little city of Wanganui, N.Z.  Fields met her when attending a party in her home town and they were married there May 31, 1943.

The young bridegroom is now making arrangements for her to come to this country to make her home.  He says it will require about six months' time to clear away the international red tape before she will be permitted to enter the United States.  The trip here - her home is about 8,500 miles away - will require about three weeks, Fields believes.  He doesn't expect her arrival in Lansing before next summer.  She will probably make her home with his sister, Fields said, residing at 720 Park terrace, and will find work here for the duration.  She was employed in a cigarette factory in Wanganui.

Meanwhile, Robert, the sailor of the famly, is making preparations to get back into the fight.  John probably will not see active service for quite some time because of malaria.

Last Christmas both boys were in the steaming malaria-infested jungles of the Solomons.  John spent from August 7, 1942 to February 9, 1943 there and Robert from September 21, 1942 to November 18, 1943.  But in all that time neither saw the other, although they corresponded regularly.

In February of last year John developed malaria and was sent to Masterton, N.Z. for hospitalization.  When he had recovered sufficiently he was given a 10-day leave and went to Wanganui, 150 miles away, where he met the girl he later married.

Meanwhile Robert was aboard his ship delivering supplies to American troops in the Solomons.  He was serving on a destroyer as a fireman first class.  The ship ran a Jap blockade during a lull in air raids to bring in needed gasoline and food to the hard-pressed Americans on the island.  When these supplies arrived, according to John, who was on the island, the Americans had only 12 planes left, and barely enough gas for one day's operations.

John told of find five Japs near the mouth of a cave, hidden by brush, but fortunately rendered harmless by the rusty condition of their weapons.  They were quickly exterminated and their watches, weapons and even one hari kari outfit, were portioned out among the Americans as souvenirs.

Off shore the navy was having its hands full beating off the continuous Jap attacks.  Robert says his destroyer's task force, was attacked by a pack of Zeros, with the result that 33 were brought down, four credited to his ship.  The remainder were wiped out in ensuing encounters with American aircraft based nearby.  It was in this battle that the San Francisco was crashed by a Jap plane, sweeping away her coning tower and another direct hit blew up her rear gun emplacement.

In another encounter, the sailor was on the fan tail of his ship when a powerful Jap searchlight swept the water.  He says the alert was sounded, a shortly we fired a torpedo scoring a direct hit on the Jap ship, then we fired two more at closer range, catching the enemy ship at both ends.  The sight was wonderful  The Jap ship lighted up with a red glow, and then as the side plates blew off, the inferno inside came into views.  The cherry red framework stood out against the flames and smoke like a tremendous spider web.

His destroyer was fourth in line.  As the Japs sank all the United States boats ahead, Field's ship was unable to change course rapidly enough, and passed over the sinking hull of the boat which had just preceded it in line.  "As we passed over," says Fields, "the sinking ship's depth charges went off lifting our boat about four feet, and putting out all the lights."

John, who was with the marines in Hawaii when the Japs ravaged Pearl Harbor, took part in the 8 a.m. flag raising when the Nips came in at tree-top height mowing down everything within range of their bombs and machine guns.  "As news of the raid spread throughout the island," he says, "the natives came in from the pineapple fields, with bared bolo knives and slashed their way through any Jap in sight."  "There was," he continues, "an effort on the part of the government to round up all native Japs and offer them the protection of jail, but sentiment ran so high that it was necessary only to confine a few.  The natives took care of the rest."

After weeks of intensive training John was sent to Midway island where 18 hours a day for 6 days of feverish effort was required to complete sand bag protection for gun emplacements.  After one night's sleep he said we awoke to find the Japs on the job.  He remembers, "They came at us in a giant V formation and our gun caught the lead plane, causing it to explode in midair and knock out the next plane as it broke up overhead."

He witnessed enemy strafing planes, crashing one of the airport runways, rolling and bounding to a point about 20 yards from his gun emplacement.  At this point, the motor, still racing at top speed, wrenched itself from the wreckage and roared over us, clearing out heads by about five fee, struck out lister bag (drinking water storage) in the middle of our gun emplacement, then bounced over our dugout which held 125,000 rounds of ammunition - it came to rest after rolling along the roadway for about 100 yards. 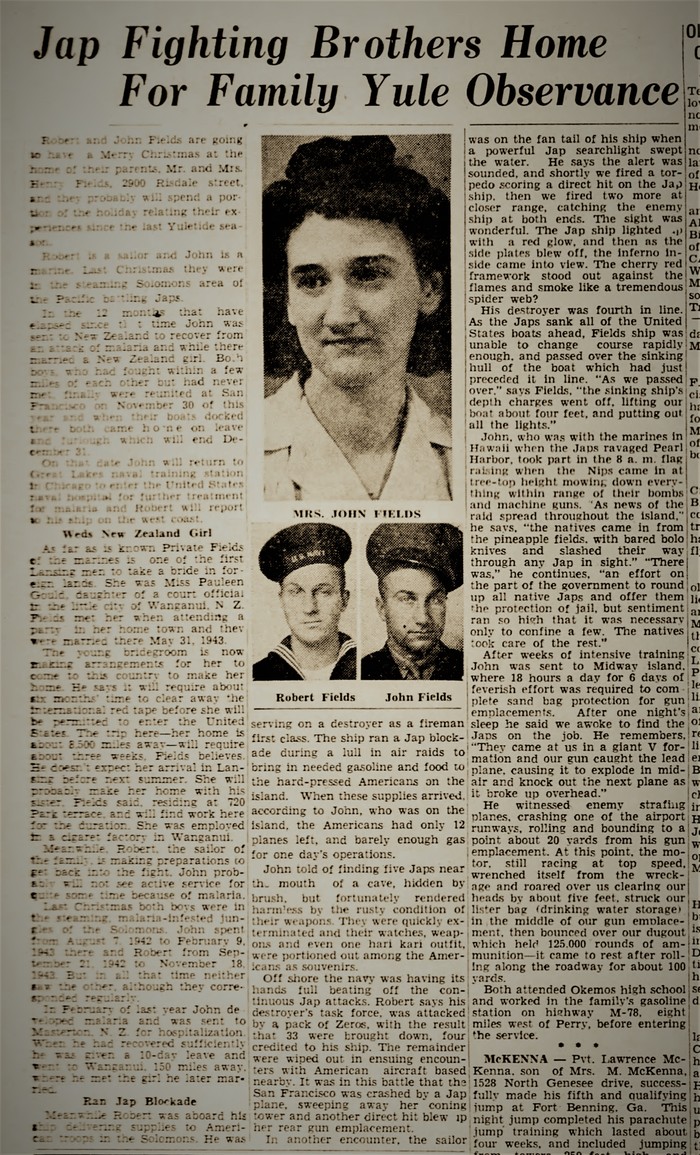 Both attended Okemos high school and worked in the family's gasoline station on highway M-78, eight miles west of Perry, before entering the service.

WORD IS RECEIVED OF BIRTH OF DAUGHTER

Mrs. Field is making her home with her mother until the time comes when she can come to the United States to join her husband, who is now stationed at the Great Lakes naval base.

Private Field of the marines has just recently been stationed at Great Lakes after spending a 30-day malaria convalescence furlough with his sister in Lansing.

Pauline and baby daughter, Jo Ann, arrived at the port of San Francisco, California 1 June 1944.  Later a son, Samuel G., was born.  Samuel too served in the US Marine Corps.  He graduated with honors from Michigan State University in the 1970's and earned an MBA degree.

John was living in California was the early 1960's.  A 6 June 1962 article was written by John to the Editor of the Oakland Tribune (Oakland, California).  John expressed his high regard for New Zealand's socialized medicine in comparison to the California medical community.