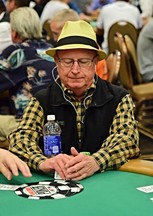 One day, Bubba picked me up hitchhiking in his robin's egg blue Riviera back in the days of hitchhikers and we became friends for some reason.

He and linebacker George Webster dropped by Nancy's house for a party that never materialized. Nancy stood on the piano bench and was still not as tall as 6'8" Bubba. They did not hang around with us for very long.

Once I dropped by his apartment which was located in a complex in back of the old Red Barn franchise. It was summertime and much to my surprise, there was actually a textbook open on the kitchen table. Bubba knows how to read? Two (2) chickens were roasting on a rotisserie on the balcony so I asked Bubba if his buddy George Webster was coming over for lunch. Bubba was completely perplexed at that question and answered in his soft-spoken bass voice, "Ain't no one coming over for lunch."

Bubba's younger brother Toby also played football for MSU. One day Toby and I got into a pool game at the Golden Eight Ball Pool Hall in the basement across the street from the State Theater. I did not mention that Bubba and I were friends. As we were playing our first game for $5 (big stakes in those day) Bubba came down the stairs. I ran the table.

Bubba looked at his brother without moving and said, "Pay the man first."

Yes, Toby was rather surprised when Bubba ordered him to pay up and yes, he did pay. We saw one another down there again, but we never played another game. I think he held a $5 grudge against me.
I had a part-time job at Jet Die. While coming home from work, a car turned in front of me and I knew I did not have time to stop and if I continued, I would splatter into the side of the car so I decided that I must jump up in the air at the EXACT moment of impact and the force would throw me over the car. An amazing split-second calculation for a nineteen-year-old!
The force of impact did indeed throw me over the car all right, and I bounced along the pavement about 100 yards down the road. This was before helmet laws and I only scratched my chin but I broke both legs and smashed my left wrist. The impact with the pavement ripped both of the lace shoes off my feet but my old style, hard contacts remained in my eyes even though  once before, I had lost one in the Lucon movie theater by simply blinking my eyes! Shortly after the ambulance carted me off, Steve Soltow came along from work and saw my mangled motorcycle. I think he threw it in his car. I did not walk on my own again for six months.

Jim Miller and someone else picked me up to go to a party in the same Bubba Smith complex when I was still wheelchair bound after my motorcycle accident with casts on both legs and one arm. The party girl's apartment  was a couple of floors above Bubba's place so they went in and got Bubba who came out and carried me upstairs on one hand like a waiter with a tray of hors d'ouevres and gently set me down on the sofa. "When you want to go back down to the car, have your friends come and get me, son."

Kill Bubba Kill reminds me of one of the best

cartoons in the student newspaper. 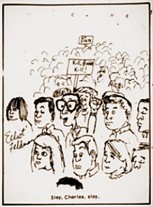 –- Elliot Feldman MSU State News (October 17,1966)
A nerdy guy is standing alone among the seated spectators yelling "Slay, Charles, Slay!" You have to imagine from the spectators' baffled reaction that the offensive team is on the field.
Game of the Century

Please post your comments to Gus' Profile Page at OkemosAlumni.org