My father's business, Paty's Auto Parts, which by the late 1960's became Paty's Inc., was located on the corners of Jolly Road and Okemos Road. Dad bought the Jolly Road (originally called Cavanaugh Road) junk yard after the war, in 1947, from Faye Crawford, who had a bad reputation as a businessman, and built it over the next nearly 30 years into a very profitable business. Dad owned two corners on Okemos Road....one corner had a small house rental and the actual corner lot was empty while the other corner was his gas station and his business, Paty's Auto Parts.

Dad and Mom (who was full partner and the investment brain behind Dad's brawn) sold the corporation, Paty's Inc., in 1974. Dad continued to own the one corner along Okemos Road for a number of years and also acreage further down on Jolly Road. I believe he completely sold all his holdings in Michigan around 1990 when he wanted to buy more land here in Florida and expand his orange groves.

The new owners of the corporation went almost bankrupt, they had a hard time with the high interest rates of the 70's and 80's. They closed the business and they eventually sold the property. It's a strip mall now. Our home has been long gone along with the rental houses Dad owned on both Jolly and Okemos Roads. I was there around 2000 and took panoramic pictures. The last time Dad and Mom were in Okemos area was in the early 1990's. Mom died in 2006. Dad died in 2010. We three Paty girls continue on with Dad's Florida holdings, J H Paty LLC. 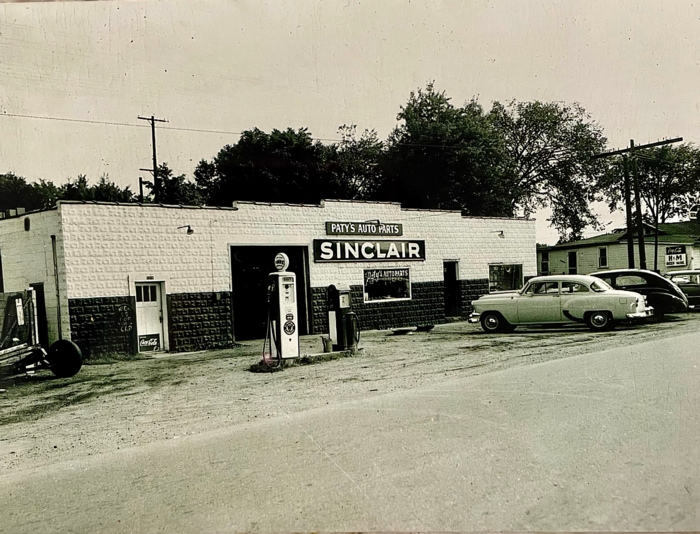 This was the original shop building that burned to the ground in 1959.  By the way, when Dad owned the gas station, he pumped Sinclair gas only. 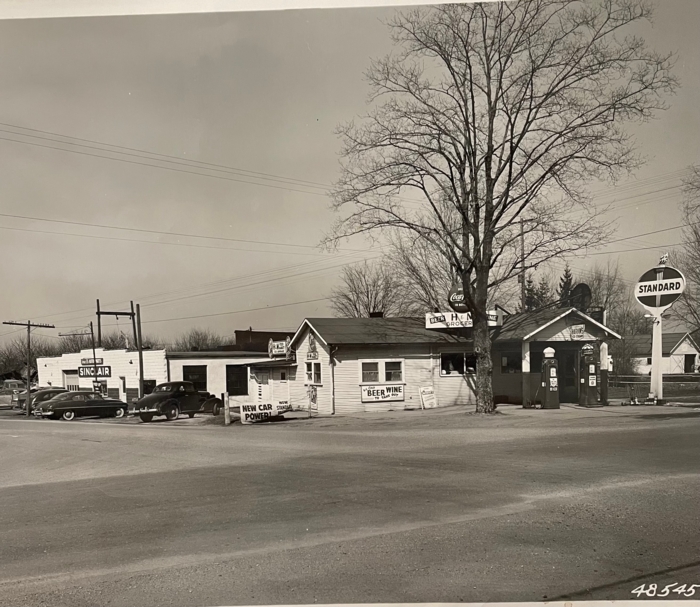 The 1940's photo gives a peek of a small garage next to the old corner gas station.  That garage, and a nice house next to it, was owned by people named Christian.  By the late 1950's dad bought their entire property.  My sister Carolyn, husband and children lived there for several years.

And I might say this, Meridian township officials were less than nice to Dad over the years, in fact it was a running commentary in our family of what Meridian township could come up with next to harass Dad. That was an ugly, constant and unnecessary situation for my parents during all their years in Michigan! In later years when I would ask Dad about Meridian Township trustees, he would just shake his head and wonder aloud why in the world the officials did everything possible to be nasty and yet they certainly liked the taxes he paid.

My father was one of the most honorable men that I have ever known. Completely honest, hardworking, innovative, entrepreneurial with high values and morals, my father was one of the finest of fine Godly men. Family always said Dad had a Midas touch. My mother was right there beside him and just like her beloved husband. Mom was brilliant with numbers, could add a huge column accurately in her head and she was blessed with incredible talent, i.e., cooking, oil painting, sewing. They were a dynamic duo.  They both were dearly loved by friends and admired by business associates. Years after their deaths they are still spoken of with high regard and praise. They left a legacy to be envied! 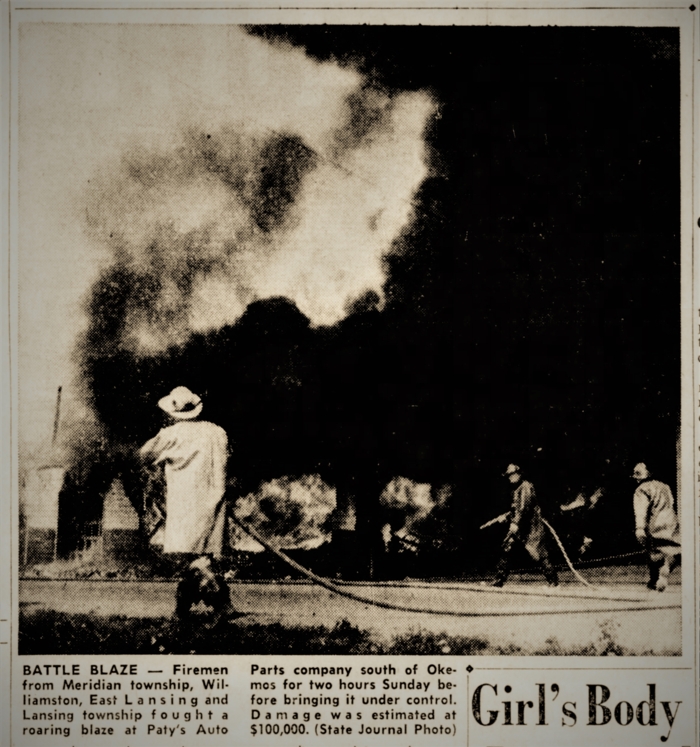