Updates to Richard Benjamin "Rick"'s profile since your last visit are highlighted in yellow. 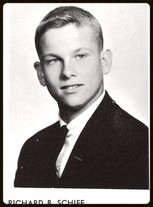 Class Year
1962
Residing In
Alexandria, VA USA
Did you serve in the Military
Navy

Comments about life and living

My folks moved to (yikes!) Columbus, Ohio, while I was at U of M, and I did not get back to Okemos until the mid 1990s when I visited close friend Tom Wheeker. Since then I have attended a couple of OHS reunions with Tom and am looking forward to this one.

Following law school I spent 28 years in the Navy JAG Corps, which afforded me the opportunity to see the world and work with the fine people of the Navy and Marine Corps. Leaving the Navy, I went initially to the National Indian Gaming Commission, which regulates tribal casinos; however, after the 9/11 attacks, I returned to the Department of Defense as general counsel for an intelligence component.

Both Judi (to whom I've been married since college) and I are now retired, and we have settled at Deep Creek Lake in Appalachian Maryland. This is the 17th home we've occupied and intend it to be our last. In addition to ensuring our dogs live the good life, we enjoy boating and tandem cycling and are active in local service organizations. I also do courtesy patrol on the ski slopes in the winter and pick up occasional consulting jobs in the fields of national security law and Indian gaming. Vision problems, then closure of the only local court, ended my days as a racquetball player.

Our daughter is married, lives in the Cleveland area and has three children, and our son
and his wife live in western NC. Education, etc: BA (English) at U of M; JD George Washington U.; LL.M. U. of Virginia. Member of the Virginia State Bar. Admitted to the Supreme Court of Virginia,
U.S. Supreme Court and Court of Appeals for the Armed Forces.