Brian Edward Lewis, age 55, died Sunday January 27, 2019, at the Kindred Hospital in Las Vegas, Nevada. Brian was born August 10, 1963, at Beaumont Hospital in Royal Oak, Michigan, and was the son of the late Benjamin Lewis Jr. and the late Shirley (nee: Bonham) Lewis.

Brian's very early years were spent in Royal Oak, Michigan and later in Okemos, Michigan. Brian was a 1981 graduate of Okemos High School where he was a standout athlete. Brian loved all sports from a very early age. He shared this passion with his father who was Brian's biggest cheerleader throughout his life. Over the years Brian's father coached and mentored his son to become a great athlete and golfer.

Brian was a member of the Okemos High School's 1981 State Basketball Championship team, and was recognized as one of the best high school golfers in the State of Michigan. Recently Brian and his fellow Okemos basketball teammates were inducted into the Okemos High School Hall of Fame. Following high school Brian entered Indiana University with a golf scholarship; however, Brian did not stay at IU long before he moved to Florida to play on the professional mini satellite golf tours.

Brian returned home to Michigan and joined the workforce. He followed in his father's footsteps working as an insurance agent for AAA insurance. When he was not working, he continued to golf with his father and friends at Walnut Hills Country Club, caught all the Michigan State University sporting events he could, and hung out with his little brother, Brad, and their many friends.

Brian was a very intelligent and kind person whom his brother remembers as a big brother who always included him. Even though Brad was 7 years younger than Brian, the two forged a brotherly bond where Brian taught Brad everything about sports, especially basketball. Brad always looked up to Brian and sought his advice when it came to sports and things during his youth. When the two brothers' were young, Brian would take time to teach Brad how to shoot the basketball, throw the football and swing a golf club the correct way. He was very patient and a good teacher, mentor, and big brother to Brad that he will forever cherish those memories. In addition to his brother, Brian was also very close with his sister Sandy. The two shared many of the same friends throughout high school and college.

Brian loved his family and his friends, and had an affinity for finding stray animals. It seemed over the years Brian would collect different animals, from dogs to cats, and bring them home to care for.

Brian is survived by his children: Reanna, Ashley, and Alex Lewis all of Nevada. He was the brother of Sandy (David) Temrowski, and Bradley (Laura) Lewis. He was the uncle of Ben Temrowski, Kelly Temrowski, Will Temrowski, Jackson Lewis, and Olivia Lewis. His aunts, uncles, cousins, and many friends further survive Brian. Brian was predeceased by both of his parents.

Please see additional memories of Brian in his memory book at the obituary link. For additional articles about Brian, please click below. 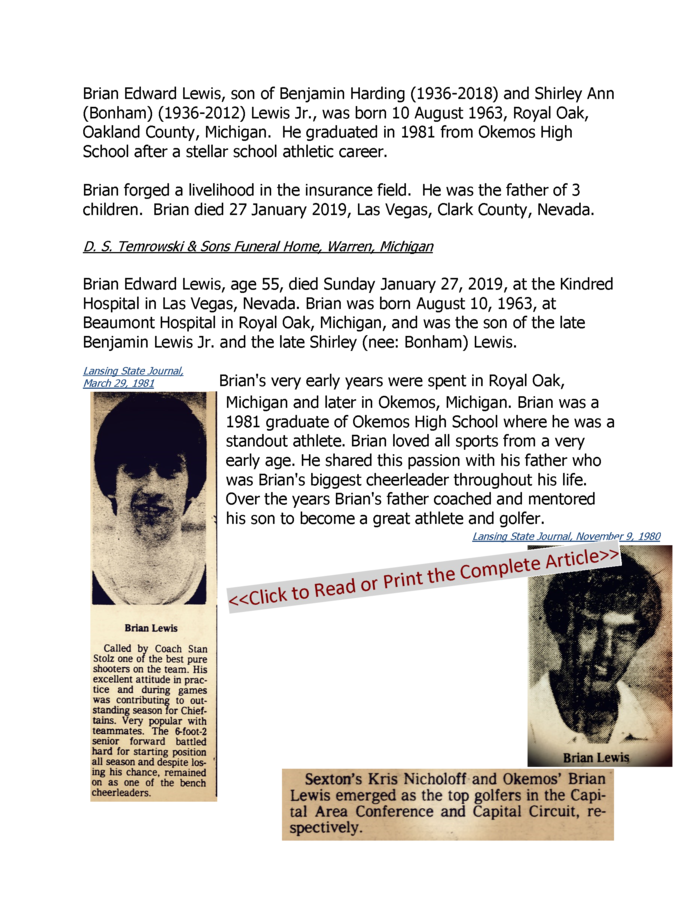