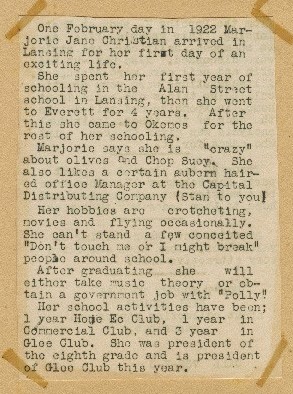 The bride wore a gown of white slipper satin, a long veil, and she carried a bouquet of rosebuds and snapdragons.  Her maid of hone, Miss Dortha Mae McCaslin, was in pastel blue and her flowers were rosebuds and baby "mums."  As bridesmaid, Miss Geraldine Wygant wore a peach colored gown and carried flowers similar to those carried by Miss McCaslin.

William G. Pearce was his brother's groomsman, and ushers for the 150 guests were Carl Barrett and Jackie Finnie.  Music during the ceremony was by Mrs. Arneal Kart, organist, and Carlton Eldridge, soloist, who was accompanied by Miss Jean Kirker.  Palms ferns, and baskets of gladioli, snapdragons, and "mums" formed a setting for the candle-lighted service.

Mrs. Christian wore a gold crepe dress, and the mother of the bride-groom was in light blue poplin.  After a short wedding trip, the newlyweds will live at 8221/2 Larned street.  Out-of-town guests were present from Ionia and Van Wert, Ohio.

Stan retired from Oldsmobile after 39 years of service where he worked as an accountant and later as an administrative assistant in fleet sales.  Marjorie died 27 September 1998 Ingham County.  Stan died 10 October 1992.  Stan and Marjorie were interred Deepdale Cemetery, Eaton County, Michigan. 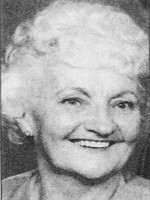