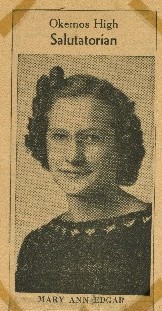 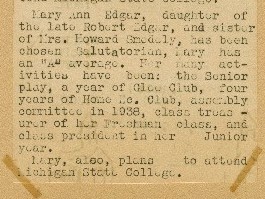 VOWS ARE SPOKEN AT HOME WEDDING

Baskets of yellow and white flowers and palms banked the fireplace in the Howard Smedley home at Okemos for the wedding Saturday of Miss Mary Ann Edgar, a sister of Mrs. Smedley, and Dick Williams, son of Mr. and Mrs. Clyde Williams of Okemos.  Rev. Harold Jayne of the Okemos Community church performed the service.

A suit of white wool was worn with navy blue accessories by the bride.  At her shoulder were pinned two orchids.  Her attendant, Mrs. Paul Chirko, was dressed in pale blue gabardine worn with a corsage of yellow roses.  Wally Schonhoff was groomsman.

Luncheon was served for 25 friends and relatives of the couple at the New Hut following the service.  They left for a trip to Chicago and will return to make their home in East Lansing.