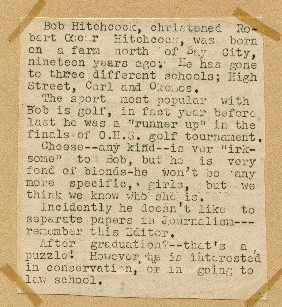 HITCHCOCK - Pfc. Robert O. Hitchcock, son of Mr. and Mrs. Howard Hitchcock of Towar Gardens, is spending a brief furlough at his home here.  He entered service last October and is stationed in Texas.

Age 82, went to be with the Lord on August 20, 2002.  He was born on July 26, 1920 in West Branch, MI to Lizzie and Howard Hitchcock.  A lifelong resident of the Lansing area, he graduated from Okemos High School in 1940 and entered the Army in 1942.  He married Lora L. Tippit of Temple, TX on August 5, 1945.  Bob was employed for 33 years with Fisher Body, from which he retired in 1975.  He was a member of Messiah Lutheran Church of Holt, U.A.W. Local #602, and the American Legion Post #183.  Robert was a loving husband, father and grandfather who understood and taught the golden rule.  Witty and fun-loving to the very end, he enjoyed golf, bowling, the outdoors, stamp collection and time with his children and grandchildren.  He is survived by; his wife of 57 years Lora; daughter, Renee (Michael) Arens and Betty (Robert) Strayer; 4 grandchildren; 1 great granddaughter; and sister Laura Ewers.  The family would like to extend a special thanks to the caring staff of Sparrow Hospice.  A Funeral Service will be held at 11:00 a.m. Friday, August 23, 2002 at Messiah Lutheran Church 5740 W. Holt Road, Holt, with the Rev. John A. Schinkel officiating.