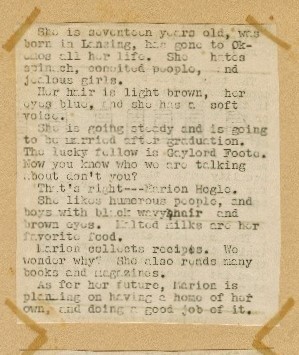 Palms and ferns were used with baskets of pink and white gladiola and stock to form a setting for the candlelight service Saturday evening in the chapel of the Peoples church at East Lansing when Miss Marian Jean Hogle became the bride of Gaylord Wilkinson Foote, both of Williamston.  Reading the service at 8 o'clock was Dr. N. A. McCune.

White silk crepe formed the gown worn by the bride whose veil was shoulder length and whose arm bouquet was of white roses and baby breath.  She was given in marriage by her father, and was preceded down the aisle by her matron of honor, Mrs. Frank Heniser, and the small ringbearer, Ada Bernice Foote, niece of the bridegroom.

Mrs. Heniser wore blue crepe and carried pink roses, while lemon-colored silk formed the frock worn by the ring bearer whose wrist corsage was of forget-me-nots and rosebuds.  Mr. Heniser was groomsman and music for the service was sung by Mrs. Blanch Ross, accompanied on the organ by Mrs. L. B. Sholl.  Ushers were Marvin Ross of Detroit and Gerald Pfeifle of Williamston.

Mrs. Purchis wore a jacket dress of aqua print silk with a shoulder corsage of gardenias.  The mother of the bridegroom chose an orchid gown with corn colored accessories.  Her corsage, too, was of gardenias.

Following the ceremony a reception was held in the parlors of the church for the 100 guests.  Upon their return from a short trip, Mr. and Mrs. Foote will make their home temporarily at 640 Sherwood road, Williamston.  Before her married the bride was feted at a number of showers.

A native of Williamston, he had lived here 21 years and was also employed during the day at Michigan State University in the department of safety services.

He was a trustee at Bath Baptist church, was on the Bath Community School Board and a past president of the Bath PTA.

Services will be at 2:30 p.m. Tuesday at Gorsline-Runciman Funeral Home, with burial in Pleasant Hill Cemetery, Bath.