Bob graduated in 1940 from Okemos High School.  He was employed at General Motors Forge plant in Lansing prior to enlisting in the US Army 13 October 1942.  Bob never married.

McKane - J. Robert McKane, son of Mr. and Mrs. James McKane, Jr., of Okemos, who has for the past year been stationed in the Hawaiian islands with the infantry, has arrived safely in New Guinea, according to word received here recently by his parents.  He was graduated from Okemos high school in 1940, and before enlisting with the armed forces October 12, 1942, was employed by General Motors Forge plant.  He received his basic training at Fort Lewis, Wash., and Los Angeles, Cal. 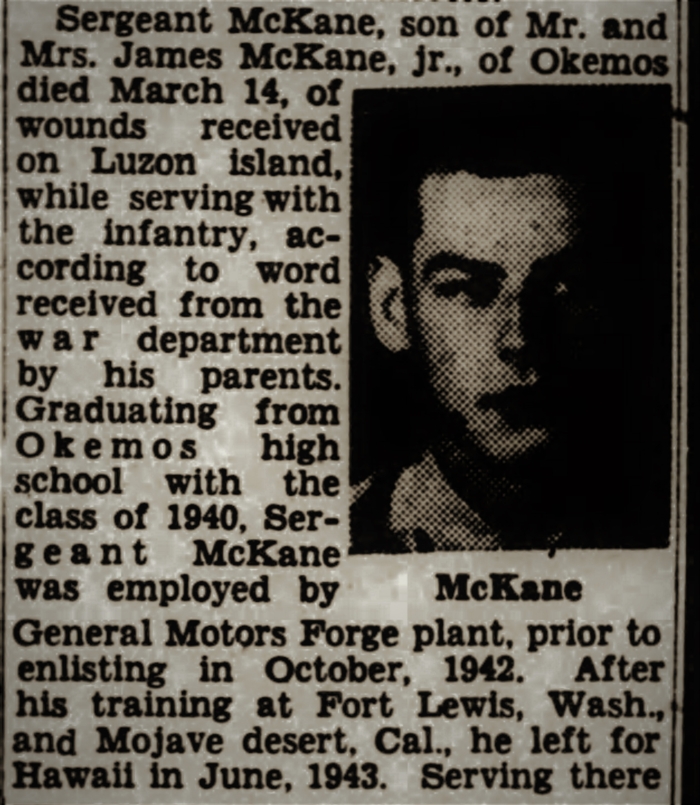 Sergeant McKane, son of Mr. and Mrs. James McKane, jr., of Okemos died March 14, of wounds received on Luzon island, while serving with the infantry, according to word received from the war department by his parents.  Graduating from Okemos high school with the class of 1940, Sergeant McKane was employed by General Motors Forge plant, prior to enlisting in October, 1942.  After his training at Fort Lewis, Wash., and Mojave desert, Cal., he left for Hawaii in June 1943.  Serving there for a year, he was transferred to New Guinea and then to Luzon.

Many in the community share the grief of the family of Robert McKane who lost his life last month on Luzon.  "Bob" visited often during his school years at the Aseltine home here.

Sgt. James R. McKane, son of Mrs. Irene M. McKane of Okemos, who was fatally wounded when he faced enemy gunfire in order to attempt evacuation of a wounded comrade, has been posthumously awarded the silver star for gallantry in action, a release from the Sixth army in Japan revealed Thursday.

The award was made by Maj. Gen. P. W. Clarkson, commander of the 33rd infantry division, "for courage, bravery and unselfish, devotion to duty that was an inspiration to the officers and men of his organization and reflects high credit on the military service..."

Sergeant McKane was wounded by machine gun fire while he was at the side of a wounded comrade of a combat patrol which encountered intense enemy machine gun and rifle fire while patrolling in enemy territory.  he acted on orders to evacuate the wounded and, as assistant squad leader, ran forward over open terrain without regard for his safety to attempt extrication of the wounded man from the path of enemy fire, the report of his actions said. 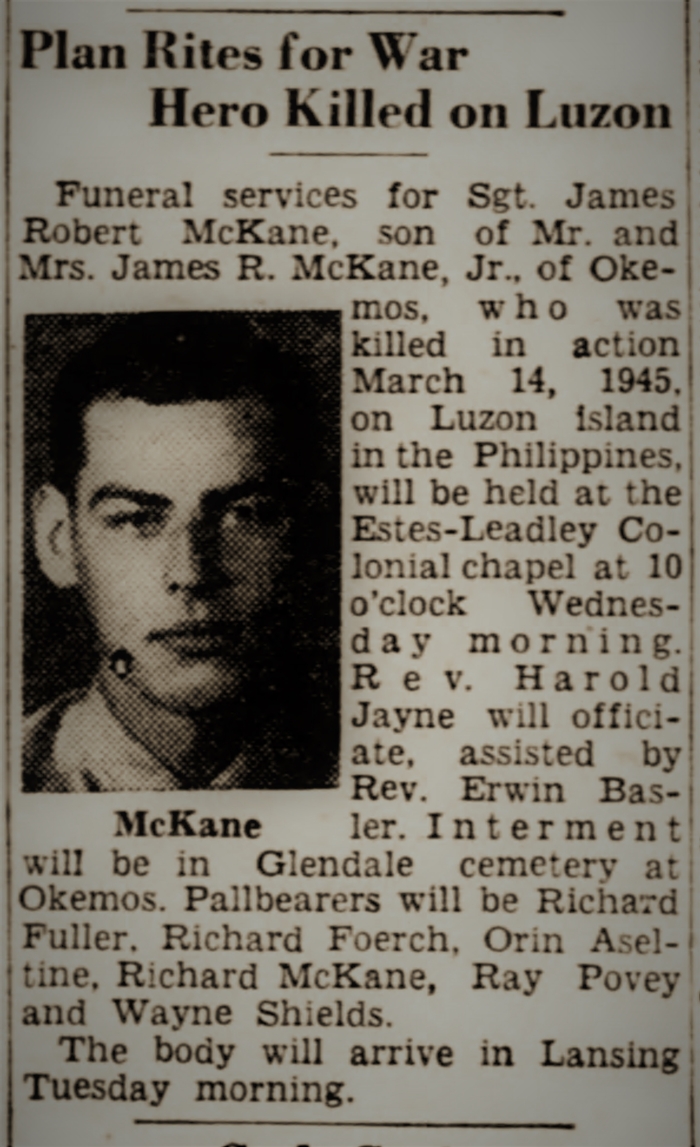 The bodies of Lansing, Holt, Okemos World War II heroes are enroute home for reburial - one in the Little Arlington plot of Evergreen Cemetery.

Reaching here Tuesday and Wednesday from army distribution centers in this country are:

Temporarily interred in military cemeteries in the Philippine islands, the bodies were disinterred at the request of their parents.  Sergeant McKane's body will arrive here Tuesday and Technician Smith's and Private Robbins' bodies Wednesday.

Sergeant McKane, the son of Mr. and Mrs. James McKane, Jr., of Okemos, graduated from Okemos high school in 1940.  (Bob was President of his Senior Class of 1940).  Prior to enlisting in the army in October, 1942, he was employed by General Motors.  He participated in four major battles, receiving the Purple Heart and Silver Star awards for bravery.

Funeral services will be held at 10 o'clock Wednesday morning from the Estes-Leadley Colonial chapel.  Rev. Erwin Basler will officiate with burial in Glendale cemetery.

Bob and his parents were interred Glendale Cemetery, Okemos, Ingham County, Michigan.  Irene McKane was interred under the surname of Rhynard.  She was married to Cecil Rhynard at the time of her 1978 death.