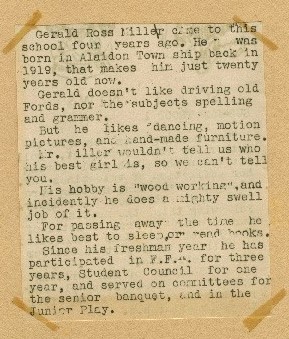 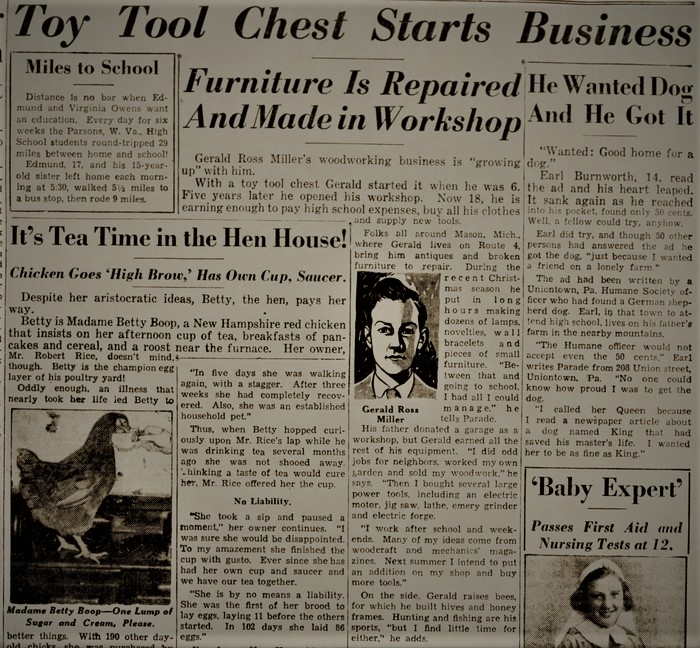 FURNITURE IS REPAIRED AND MADE IN WORKSHOP

Gerald Ross Miller's woodworking business is "growing up" with him.

With a toy tool chest Gerald started it when he was 6.  Five years later he opened his workshop.  Now 18, he is earning enough to pay high school expenses, buy all his clothes and supply new tools.

Folks all around Mason, Mich., where Gerald lives on Route 4, bring him antiques and broken furniture to repair.  During the recent Christmas season he put in long hours making dozens of lamps, novelties, wall bracelets and pieces of small furniture.  "Between that and going to school I had all I could manage" he tells Parade.

His father donated a garage as a workshop, but Gerald earned all the rest of his equipment.  "I did odd jobs for neighbors, worked my own garden and sold my woodwork," he says.  "Then I bought several large power tools, including an electric motor, jig saw, lathe, emery grinder and electric forge.

"I work after school and weekends.  Many of my ideas come from woodcraft and mechanics' magazines.  Next summer I intend to put an addition on my shop and buy more tools."

On the side, Gerald raises bees, for which he built hives and honey frames.  Hunting and fishing are his spots, "but I find little time for either," he adds.

Gerald filed for bankruptcy in 1949.  There were several notices printed in the Lansing State Journal.

Born March 29, 1919, in Mason; died December 11, 2003, at the age of 84.  Mr. Miller retired in 1981 from the D.N.R. after 20 years of service.  he was a member of Christ United Methodist Church and the Greater Lansing Orchid Society and a life member of the Lansing Potters Guild.  Surviving are his children, Linda (Ron) Miller and Ronald (Sherry) Miller both of California, Charles Miler of Traverse City, Robin (June) Miller of Florida and 6 grandchildren.  Funeral services will be held Tuesday, December 16, at noon at the Gorsline-Runciman Co. Lansing Chapel, 900 E. Michigan Ave., Lansing.  Interment will follow in Deepdale Memorial Gardens, Lansing.