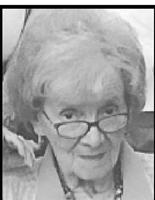 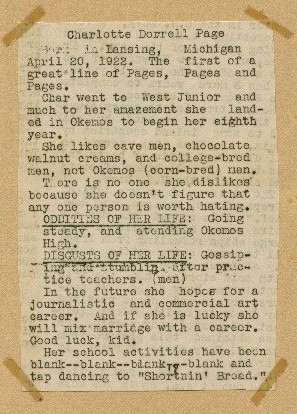 Altar bouquets of white chrysanthemums and white tapers in candelabra formed a setting for the ceremony.  Miss Ruth Woodworth sang "Because" before the services, and the organist, Mrs. Margaret Goodell Ebersole, played "I Love You", Gregg, "Ave Maria", Shubert, "Andante Cantabile", from Tchaikowski's "Fifth Symphony", and traditional wedding marches.

The bride wore draped chestnut brown crepe with dark brown accessories.  She carried a bouquet of yellow roses and bronze chrysanthemums centered by a detachable corsage of yellow orchids.  Maid of honor Miss Maurine Alice Page, sister of the bride, who wore aqua crepe with brown accessories, and carried a bouquet of yellow and bronze chrysanthemums.  Francis Sherman was groomsman, and the ushers were Robert Cessna, Gerald Cessna, and Roger Cessna.

STEVENSVILLE - Charlotte Page Cessna of Stevensville died peacefully surrounded by her family on September 5, 2012 at the Corsica Hill Center in Centreville.  She was 90.

Born in Lansing, Mich. on April 20, 1922, she was the daughter of George Register Page and Inez  Dorrell Page.  She graduated from Okemos High School in Okemos, Mich. and attended Michigan State University.  In 1942, she married Hall Cessna, and they made their home and raised their family in Lansing, Mich.

Mrs. Cessna loved animals and always had a dog in her home.  She enjoyed to spend her free time engaged in handicrafts especially knitting, counted cross stitch and needlepoint, and was a fabulous cook.  Her loving support, encouragement and generosity of spirit enriched the lives of her family and friends in countless ways.

Harold M. Cessna, news director of WOWO, Ft. Wayne, will be the speaker at the meeting of the Muncie Kiwanis Club Wednesday noon at the Hotel Roberts.  A native of Adrian, Mich., Cessna is a graduate of Michigan state University, served in the army during World War II, and also has had radio experience in Lansing and Kalamazoo, Mich.; Akron, O., and Carthage, Ill.  He joined WOWO in 1956.

Harold "Hal" Cessna died on March 13, 2014, at Ann Arundel Medical Center in Annapolis peacefully surrounded by his family.  He was 93.

Born in Adrian, Mich., the son of the late Clarence and Alice (Colvin) Cessna, he graduated from Michigan state in 1942.  After graduation, he married and was drafted into the Army, serving with Patton's third Army at the Battle of the Ardennes Forest.  After the war, Hal then began a career in broadcasting in Carthage, Ill.  In 1956 he joined Westinghouse broadcasting, WOWO in Fort Wayne, Ind., and then KDKA in Pittsburgh, where he covered political conventions.  In 1967, he became a News Director for COX Broadcasting on Capitol Hill in Washington, D.C., ending his career in 1998.  Hal and Char retired to the Eastern Shore of Maryland.

A memorial service will be held at noon on Monday, March 24, at Christ Episcopal Church, 830 Romancoke Road, Stevensville, where family and friends can visit starting at 11 a.m.