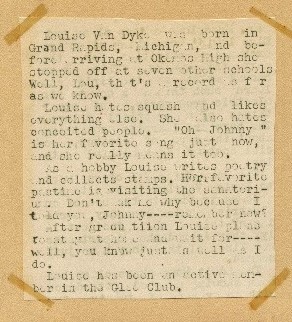 Louise attended several different high schools before graduating in 1940 from Okemos High School.  It is unknown why she was in the Ingham County going to school other than she was living in the area.  According to the 1940 US Federal Census, Louise was enumerated in April 1940 living in Franklin Square House, East Newton Street, Boston, Suffolk County, Massachusetts.  She was not employed but listed herself as having been a resident in Grand Rapids and Michigan born.

Seemingly Louise enrolled in 1940 and graduated from Cushing Academy, Ashburnham, Worchester County, Massachusetts.  The co-educational Academy is about an hour away from Boston and was founded in 1865.

Miss Mary Ethel Chatham was the maid of honor and the bridegroom's father was his best man.

The couple expect to live in Chicago after September when Mr. Chatham plans to enter Chicago university and Mrs. Chatham will study music.  She was graduated from Cushing academy and has served two years with the coast guard.  Mr. Chatham was graduated from Cleburne high school and Franklin Institute of Technology, Boston.  He served three years with the 17th Photo Intelligence Detachment, U.S. army air force, in the United states and India.

A ruling was pending Friday in the deth of an Austin woman who was discovered dead after her mailman noted she had not picked up her mail.

Justice of the Peace Richard E. Scott ordered an autopsy in the death of Louise Chatham, 55, of 4605 Parkwood.  She was found dead in bedroom shortly after 5 p.m. Thursday.

Homicide detectives were called to the scene because of blood found on a bedroom closet door.