Okemos high school is looking forward with hopes of scoring athletic triumphs during the outdoor season.  The Chiefs will be defending their state Class D and county track championships with a veteran team, aim to make a much better baseball record and Dick Fuller, undefeated in county tennis circles last spring, is back to head up the net forces. 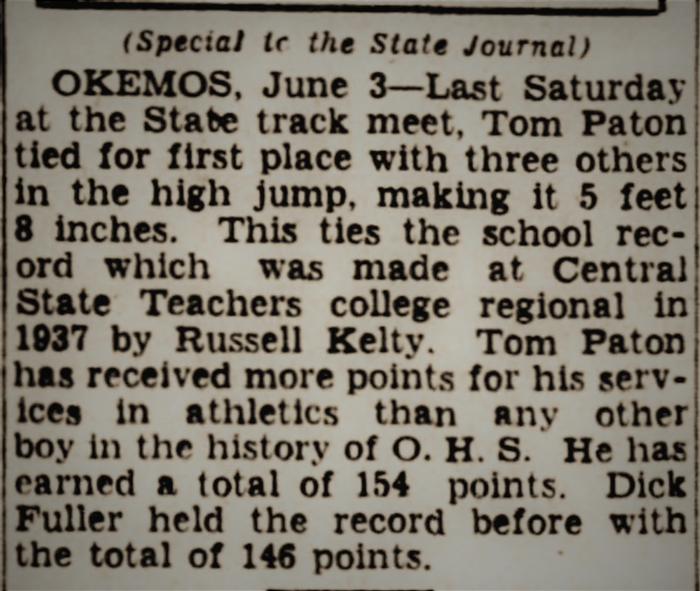 Note: We could not find other information on his Tennis or Track, but a mention in the June 3, 1941 Special addition to the Lansing State Journal notes that Dick was the school record holder for points total in track.

Much of the track strength will be found in Don Kelty, Wayne Parrish, Ted Howard, Fuller and Stanley Rogers.

Age 67, died January 15, 1988, born June 23, 1920 in Haslett.  Mr. Fuller was a member of Haslett  Baptist Church and was a veteran of World War II, serving in the European Theater.  He was formerly employed by Ray Sablin Gravel Company (1948-1953).  He retired in 1982 as Vice-President of Cheney Concrete.  He was preceded in death by a son, Robert (1978).  Mr., Fuller was the dearly loved husband of Marion; father of Mrs. Todd (Brenda) Lilje of Kent City and Barbara Lantis of Haslett; grandfather of Kim, Sean, Jonathon, Rebekah and Megan; brother of Max, Gerald and Gene Fuller, uncle of several.