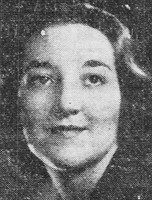 Two weddings during the holidays of interest to Okemos people were those of Miss Helen Howarth to Lee Rathbone and Miss Marian Gleason to Stanley Rogers.  The former were 1938 graduates of the Okemos school as was also Mr. Rogers.  Mrs. Rogers is a member of the senior class of the local high school.

An article in The State Journal under Okemos date line of Thursday stated Miss Helen Howarth and Lee Rathburn (note surname misspelling) were married during the holidays.  This is absolutely untrue Mrs. C. R. Howarth states and The State Journal deeply regrets that such an article appeared and that the correspondent was erroneously informed.

Although the State Journal printed several articles on Helen being showered and feted by friends prior to her October 1939 wedding, no article about the actual wedding was written up in the Lansing State Journal.