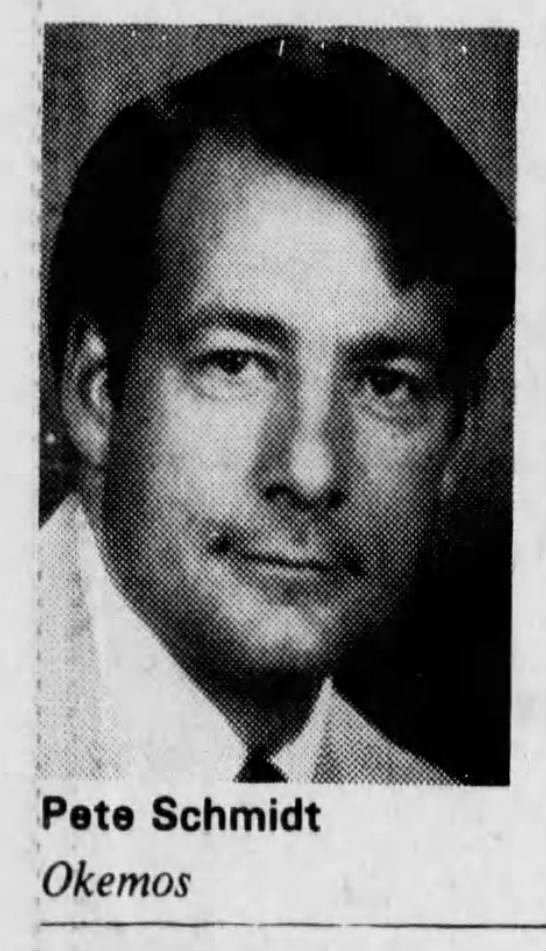 He played football, baseball and basketball for Alma College from 1966 to 1970.

He was head football coach of the Albion College Briton football team from 1983 to 1996 and compiled a 106-26-5 record that led the team to five NCAA playoffs and nine Michigan Intercollegiate Athletic Association championships. He also served as the athletic director for Albion College from 1992 to 1996.

He had also served as a professor, assistant track coach, recruiting and compliance officer, events manager and facilities coordinator at the college level. While working for Okemos and Stockbridge High Schools, he taught physical education and coached football, baseball and wrestling.

Schmidt arrived at Indiana University prior to the 1997 season to be the offensive coordinator of the football team. He held that position until early last season when he was diagnosed with cancer and left the team to begin treatments.

He married Becky Schmidt. She survives.

Also surviving are a son, Peter A. Schmidt of Bloomington, Ind.; daughters, Amy Stille and Sarah Fuller, both of Grand Haven; his parents of Port Austin; brothers, Tom and Steve Schmidt, both of Port Austin; and a sister, Belma 'Schmidt of Lexington. 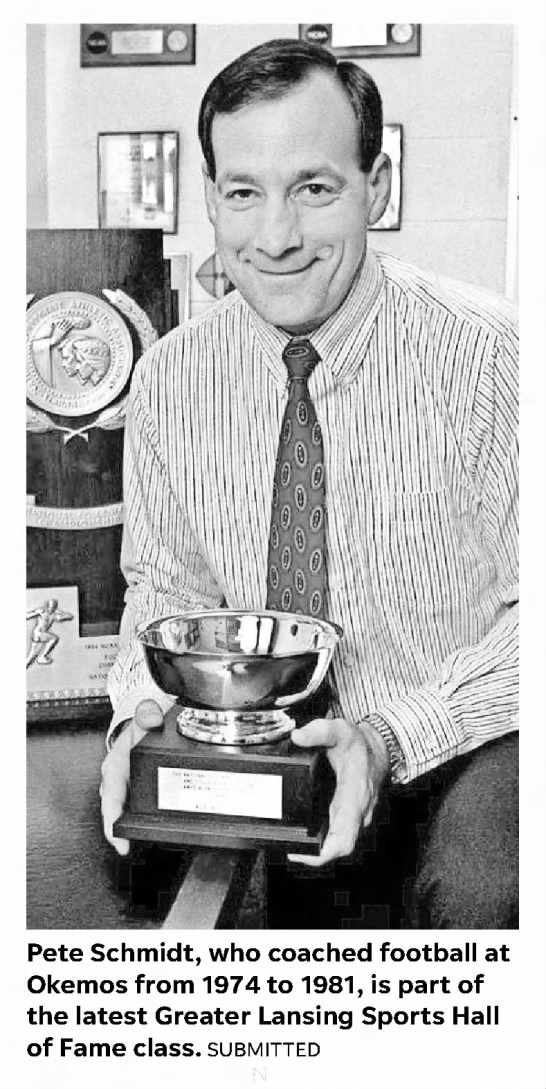 Former Okemos football coach Pete Schmidt, who also found in- credible success at Albion College and Indiana University, is among nine individuals being inducted Thursday into the Greater Lansing Sports Hall of Fame.

Schmidt has already been inducted into halls of fame at Okemos and Albion and will be inducted into the Michigan Sports Hall of Fame later this year.

Schmidt died at age 52 in 2000 after battling lymphoma. His wife, Becky, will be accepting the honor on his behalf at the Lansing Center. The couple had three children, Amy, Peter, and Sarah.

“Pete was an easy-going guy, enjoyed going to his kids’ sporting events and al- ways kept himself busy,” Becky Schmidt said. “Pete was a very humble person – supremely conﬁdent, but coupled with a humility that is really rare to ﬁnd in a person.”

In his time at Okemos from 1974-1981, Schmidt helped lead Okemos to six conference titles and three undefeated sea- sons, and his team was Class B state runner-up in both 1976 and 1980.

Schmidt moved on in 1983 to become the head football coach at Albion College, a Division III school in the MIAA conference.

Schmidt won a conference title in his second season in 1985 and turned Albi- on into a Division III national power-house, tallying seven straight conference titles from 1989-96 and reaching the pinnacle with a national championship in 1994.

“He loved every minute of his job, and it never seemed like work for him,” Becky Schmidt said. “He loved to compete, and he had a pursuit of excellence which is indicative of his record. He was deﬁnitely an intense competitor.”

Schmidt moved onto the NCAA Division 1 ranks following Albion’s 1996 sea- son, being hired by Indiana as an assistant head coach and quarterbacks’ coach.

He remained in that role until his passing four years later.

Even with his track record of winning wherever he went, it always meant more to Schmidt to teach and grow young men, both on the ﬁeld and in life.

“I was at a game and I had an old Albion varsity blanket wrapped around me,” Becky Schmidt said. “This guy stopped and asked if I went there, and I said my husband was the football coach for many years. He said, ‘Pete Schmidt? I played for him all four years. I didn’t play much, but I stayed there because he made me feel just as important as the starters.’

“I often think about that moment as a great testament to the man Pete was. We are all incredibly proud of his legacy, and it’s not so much about his record.”

Where: Lansing Center Tickets: $35 per individual and can be purchased at lansingsportshalloffame.org

From Wikipedia, the free encyclopedia
Jump to navigationJump to search

Peter J. Schmidt (April 24, 1948 – September 29, 2000) was an American football coach. He was the head football coach at Albion College from 1983 to 1996 and led the school to nine Michigan Intercollegiate Athletic Association (MIAA) championships and the NCAA Division III Football Championship in 1994. He has also served as the offensive coordinator at Indiana University from 1997 to 1999. Schmidt died in September 2000 at age 52 after a year-long battle with cancer.[1][2][3] Schmidt's overall record in 14 years as a college football head coach is 104–27–4.[4] Since 2001, the Pete Schmidt Memorial Scholar-Athlete Award has been presented each year by the MIAA football coaches to an outstanding scholar-athlete at an MIAA school.[5]