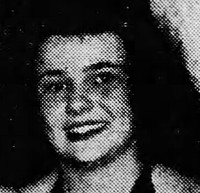 The couple left for a short honeymoon after a reception in the church parlors, and are making their home in Wacousta.