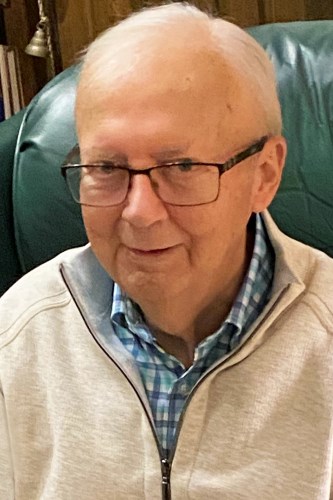 Born Sept. 21, 1941, in Lansing, Mich., Chuck was the oldest of three children to Kenneth Stoll and Erma Vasold Stoll. He attended grade school in Lansing and high school in Okemos, Mich., where he enjoyed wrestling and football and excelled in his studies. Chuck attended Michigan State University both as an undergraduate and a graduate student, earning special recognition for his academic achievements from Chi Epsilon and Tau Beta Pi while attaining his Civil Engineering degree, specializing in soils. In addition, he was an active member of Phi Delta Theta.

Upon graduating in 1965, Chuck relocated to Madison, Wis., to work for Warzyn Engineering, Inc., as a Geotechnical Engineer. One of his first major projects was overseeing the construction of the Monona Causeway. Chuck remained at Warzyn for the entirety of his career, having served as Treasurer/Vice President and finally Chairman of the Board. In retirement, he served as President of Blackhawk Country Club.

While new to Madison, Chuck met the love of his life, Harriet Hipke, whom he married in 1966 and loved and adored for 55 years. Soon after their marriage, they welcomed their son, Ken, and daughter, Cathy, into their lives. He loved each one of them, unconditionally, with all of his heart, until his last breath on Dec. 10, 2021, after fighting cancer for the fourth time ‑ surrounded by the love of those who were most important to him.

Chuck enjoyed attending and supporting Badgers basketball and football. He loved to golf and together, he and Harriet developed many lifetime friendships at Blackhawk Country Club. Among the most important and revered, were the ROMEOs. He loved to work outside and maintain his yard. He was meticulous, and it showed, not only in his yard, but in every aspect of his life. Chuck loved photography and music and was often found humming along to jazz classics playing in the background. He loved to read, both fiction and nonfiction, and he continued to educate himself in various fields of interest over his lifetime. Chuck was a giving man and contributed to a multitude of charities and institutions throughout his life so that others might benefit from his successes.

Perhaps most paramount, Chuck believed in family and the experiences and importance of spending quality time together. He organized multiple family ski trips, vacations and adventures across the U.S. and overseas. He dedicated his life to provide for his family those things he deemed most important in this world. We feel he succeeded beyond all expectation, and we are honored to carry on his ideals and legacy.

Chuck is survived by his wife, Harriet; his two children, Kenneth (Laura) Stoll II and Catherine (Dan) Barker; his grandchildren, Cole and Anna Barker; his brother, Roger (Martha) Stoll; his sister, Christine (Joe) Bostater; his sister and brother‑in‑law, Genevieve (Honey) and John Leibham and many loved nieces and nephews. Chuck was preceded in death by his parents; his in‑laws, Annacille and Richard Hipke; his brother‑in‑law, Alfred (Dick) Hipke; and his nephew, Terrence Leibham.

Memorials in Chuck’s name may be made to UW Carbone Cancer Center, 600 Highland Ave., Madison, WI 53705, or to a charity of the donor’s choice to further his legacy of generosity.  The family wishes to thank all of Chuck’s doctors and caregivers, especially Dr. Rajguru, Dr. Zurbriggen, Dr. Griffith and Danielle Lima, NP. Online condolences may be made at www.gundersonfh.com

Ron Whitmore has recently notified me of Chuck Stoll's passing on December 10, 2021.

His Obituary is posted at the - Gunderson Funeral Home, Middleton, WI website.  You will have to scroll down the Obits to get to Chuck's on December 10, 2021.

I have attached both a PDF and a WordPerfet Word Doc, of Chuck's Obit, if you can open and read them.

If you would like to share any memories of Chuck with all of us, simple do a "Reply All", and then your thoughts, Comments and Memories will be sent to all of your classmates included in the e-mail

I certainly do not enjoy my roll as the "Grim Reaper", but this is information most of you want to know.  Chuck was at both our 50th and 60th reunions.  Maybe he was at the 55th, as well, as I did not attend that one.

My best to all of you, Bob Stetler

Chuck was one of a kind.  I remember when his nickname was Old Herbie and him driving with his head tilted so he could see the road with his good eye. He wasn’t prone to gossip and I can’t recall him saying a bad word about anyone.

Chuck was a good friend both at OHS and MSU.  I had the pleasure of visiting he and Harriat on Madison and playing Golf with him at Blackhawk.  I was happy to see them at our last reunion.  A great guy who will missed by all that knew him

Our circle keeps getting smaller.  It actually started in elementary school, when Kent Nelson and his father drowned, in Houghton Lake, and continued through high school, as classmates either moved away or simply dropped out of school.

Chuck was the voice of reason,, during out senior year, when some of our wilder (possibly including me) avocated more ras actions.