Updates to Sally's profile since your last visit are highlighted in yellow. 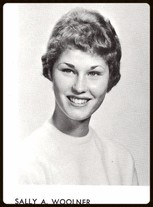 After OHS I graduated from the University of Michigan with a degree in English. This was followed by a master's degree in social work from Boston University in 1969. On a ski trip to Vermont I met Bob Schmidt, who was in his general and vascular surgery residency in Cleveland, Ohio. We carried out an American Airlines romance for the next six months. Try marrying someone after your only experience together was an occasional weekend -- lots to learn about whom you actually married!

In Cleveland, I worked in psychotherapy at University Hospitals until Bob's residency was completed in 1972. We then moved to Milwaukee, Wisconsin, where I have worked as a psychotherapist for Lutheran Social Services, other agencies, and in private practice. In 1985 I completed a two~year (Tuesday travel) course at the Chicago Family Institute concentrating on family and marital therapy, and that has remained my interest since.

We have raised two boys to adulthood. In the 1990s we sent them away to college and, to our remorse, we have since learned that when you send a child away to college, they stay away. Andy lives in Denver and Bill in LA.

My political views have remained unchanged through the years. With the heritage-of my father working for Gov. G. Mennen Williams in the 1950s and then going to Washington, D.C, in 1961 to serve in the Kennedy and Johnson Administrations, I have remained a hard-core Democrat. From 1972 until 2000 we held an election day party every four years with friends leaning to both (and opposite) sides attending. Until 2000 everybody remained civil and respectful of other's views.
However, discord and hostilities surfaced and remain today, so that was our last election day party. Bob and I continue to cancel each other out at the polls.

I am sorry that I run unable to attend the reunion. In 2005, I was diagnosed with Parkinson's disease and, unfortunately, there has been a progression over time. I have continued friendships with Linda (Miller) Rockey, Beth Taylor, Sharon (Brown) Favor and Jeanette Kreider.