In addition to the husband, Mrs. Wilson is survived by four children, Roland, Wallace, Betty Anna, and Donald; the mother, Mrs. Anna Cole of Oxford, and two sisters, Mrs. Hattie Cole and Miss Myrtle Cole, both of Oxford.

The funeral will be held Monday afternoon at 3 o'clock at the Gorsline-Runciman Funeral home.  The Rev. C. M. Mullenburg will officiate.  Burial will be in Evergreen cemetery.  The body will remain at the Wilson home in Okemos until time for the funeral.

Don graduated from Okemos High School in 1941.  He went on to attend Michigan State College before entering the US Army air force.

Among the officer students undergoing Flying Fortress pilot training at Hendricks Field, Sebring, Fla., and who expect to complete the nine-week course next month are: First Lieut. Lawrence R. Lockwood, son of L. R. Lockwood, 1022 Parker street, and Second Lieut. Donald G. Wilson, son of Mr. and Mrs. H. E. Wilson, Okemos.  Lieutenant Lockwood, former clerk in the Board of Water and Electric Light commissioners, entered the service in January, 1942, and won his silver winds and gold bars at Moore Field, Tex., September 6, 1942: while Lieutenant Wilson was "winged" and commissioned in January at Turner Field, Ga.  He was attending Michigan state college at the time he entered service  in December 1942.

Lieutenant Wilson, pilot of a B-17 bomber, who once before was missing in action over Germany but out-witted enemy forces and returned safely to his base last November, was stationed in Italy with the army's 15th air force.  Recent raids which he described within censorship limits in letters to his parents, Mr. and Mrs. H. E. Wilson, had taken him into "tough territory."  His father, who reported the casualty, said the young officer had participated in raids over southern Germany, Austria, Hungary and northern Italy, and had supported the Russians in their drive in Silesia.

Mr. Wilson said the war department telegram promised a latter would follow containing details of how his pilot son met his death, but this letter has not been received.  A graduate of Okemos high school and a student when he entered the army air forces, Lieutenant Wilson received his commission January 7, 1944 in Georgia.  He flew his plane and crew to Italy September 17, 1944.

Collision of two bombers, on their way to raid a target in Austria March 16, resulted in the death of First Lieut. Donald G. Wilson, pilot of one of the planes, his father, H. E. Wilson, was informed in a recent letter received from Lieut. Col. Floyd B. Cofer, Jr., of the army air forces and released Thursday.

This letter from Colonel Cofer followed by about a week receipt of the war department telegram by his father containing the information that his son had died in action in Italy.

Colonel Cofer, who was Lieutenant Wilson's squadron commander, wrote the dead officer's father that the accident occurred "on the way to a vital industrial target in Austria when, in a low undercast, the plane in which your son, Donald, as pilot collided with another."

The communication from the squadron leader revealed that Lieutenant Wilson was given a Protestant funeral and was buried with full military honors in an American military cemetery in southern Italy.

Colonel Cofer reported Lieutenant Wilson had been award the Purple Heart medal for wounds suffered on a previous flight.  he said this decoration would be forwarded to Mr. Wilson at a future date along with the air medal and an oak leaf cluster.

"I, as the squadron commander, knew him as both Lieutenant Wilson ad as Don; that is, I knew him both as a soldier and as a man and friend.  He was a leader among men and will long be remembered by those with whom he served."

BODY OF AVIATOR TO ARRIVE TUESDAY

The body of First Lieut. Donald G. Wilson, 21, son of Mr. and Mrs. H. E. Wilson, 1407 West Shiawassee street, who was killed in a midair bomber crash near Foggia, Italy, on March 16 1945, arrives here Tuesday for reburial.  The plane was returning in a dense fog from a bomb run to Austria.  At the time of the fatal crash, Lieutenant Wilson was attached to the 18th Air Force, 340 Bombardment squadron and the 97th Bombardment group.  He was a graduate of Okemos high school and attended Michigan State college two years before entering the air force.

The body will be taken to the Gorsline-Runciman funeral home for last rites at 2:30 o'clock Wednesday afternoon.  Rev. G. M. Mullenburg of the Westminster Presbyterian church will officiate.  Burial will be in Evergreen cemetery.

WILSON FUNERAL TO BE WEDNESDAY 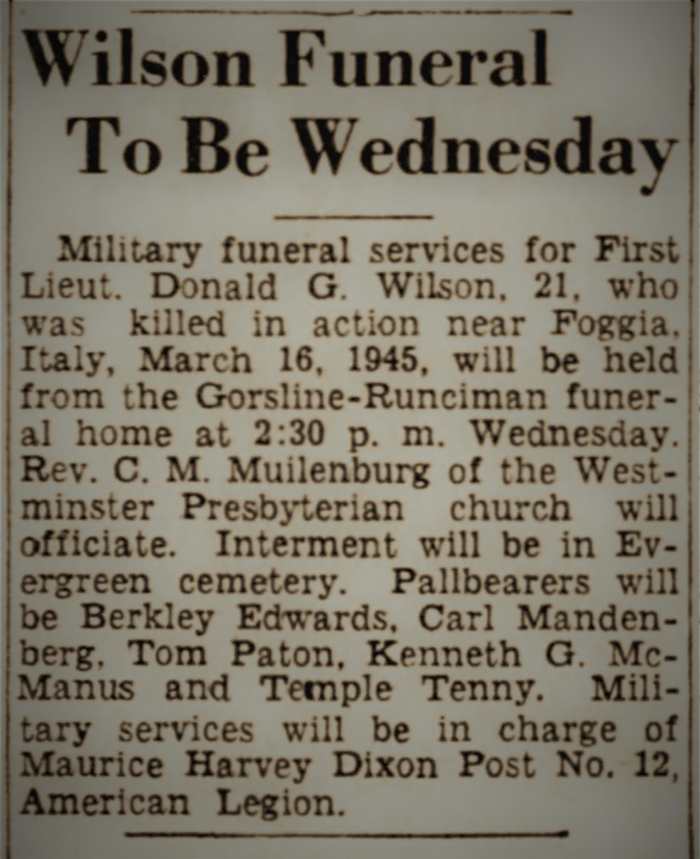 Military funeral services for First Lieut. Donald G. Wilson, 21, who was killed in action near Foggia, Italy, March 16, 1945, will be held from the Gorsline-Runciman funeral home at 2:30 p.m. Wednesday.  Rev. C. M. Mullberg of the Westminster Presbyterian church will officiate.  Interment will be in Evergreen cemetery.  Pallbearers will be Berkley Edwards, Carl Mandenberg, Tom Paton, Kenneth G. McManus and Temple Tenny.  Military services will be in charge of Maurice Harvey Dixon Post No. 12, American Legion.

Don was reported to be flying a B-17 but according to one historian B-25 Mitchell were being flown by the 340 Bombardment Group out of the Foggia Airfield Complex in late 1943- spring 1944.  The Foggia Complex was originally constructed by the Italian government and later expanded and upgraded by the German military command.  It was a series of airfields, all located within a 25 miles radius of Foggia, in southeastern Italy.  The base Don was using is now called Foggia-Gino Lisa Airport. Almost all the other Foggia landing sites have been reclaimed as farm land and little to nothing is now recognizable as an airfield.