Hugh Horace Holloway, son of Leonard (1890-1963) and Lena (Whitehead) (1891-1984) Holloway, was born 12 August 1916, Arkansas.  He graduated in 1935 from Okemos High School and went on Michigan State College to obtain undergraduate and graduate degrees.  Hugh was a World War II veteran of the US Army Air Force.  It was while serving in the military that he met and married 1st Lieutenant Ruth Griffith in 1943.

Hugh dedicated his life to not only serving his country but also serving in the field of education.  He died of cancer 17 November 1987 Hennepin County, Minnesota.  Ruth, born 8 May 1919 Iowa, died 14 April 1995 Hennepin County.  Hugh and Ruth were interred Fort Snelling National Cemetery, Minneapolis, Hennepin County.

Holloway was superintendent of Burnsville-Eagan-Savage School District 191 from 1967-1975.  He also served as a visiting professor at Mankato State University.

In 1975, he resigned as school superintendent but was hired as a district consultant for two years.  He later was president of Sheldon Jackson until he retired in 1982.

He was a math instructor from 1946 to 1948 at Michigan State University, where he received his bachelor's, master's and doctoral degrees.

In 1965 he was awarded the Worth McClure Fellowship for Advanced Studies by the American Association of School Administrators.

Holloway as an Air Force veteran of World War II and continued serving in the air Force Reserve until he retired in 1973 with the rank of colonel.

He was a Sunday school teacher, choir director and active member in the Episcopal church as well as a member of Rotary International, Kiwanis Club and Chamber of Commerce.

He is survived by his wife, Ruth Ann; daughters, Barbara Clark of Miami, Carol Lake of Bloomington, Alice Larson of North Oaks and Mary Ruth Manthey of Plymouth; sisters Joanne Lewis and Arneal Kart, both of Florida; a brother, Don of Michigan, nine grandchildren and four great-grandchildren. 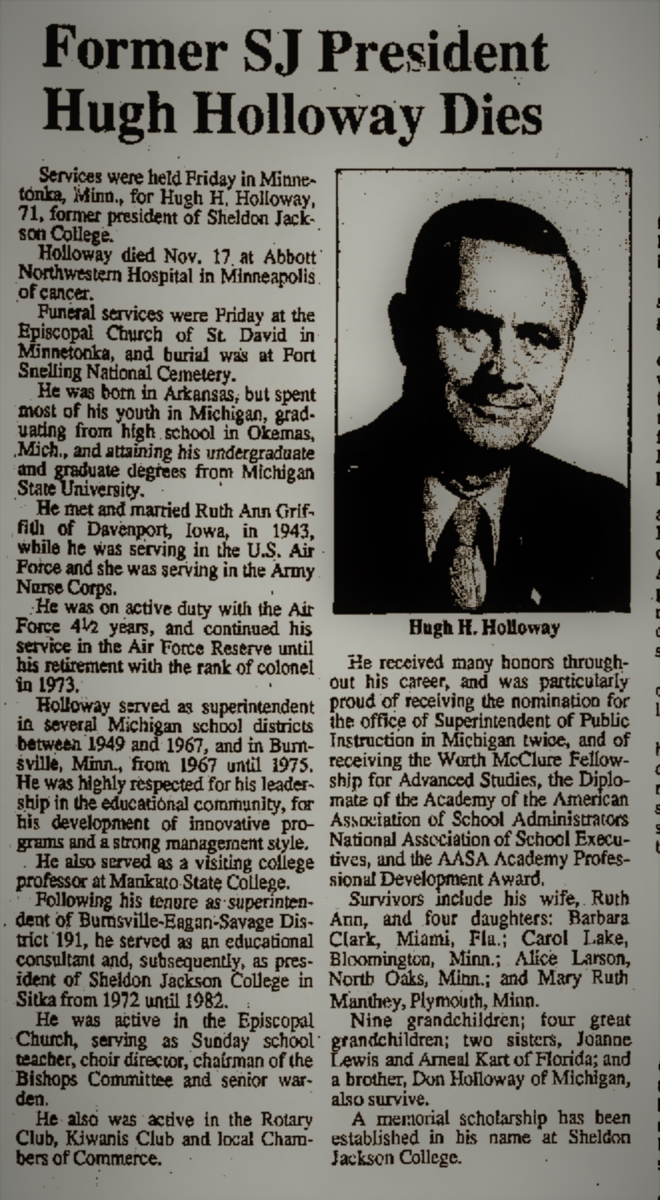 Funeral services were Friday at the Episcopal Church of St. David in Minnetonka, and burial was at Fort Snelling National Cemetery.

He was born in Arkansas, but spent most of his youth in Michigan graduating from high school in Okemos, Mich., and attaining his undergraduate and graduate degrees from Michigan State University.

He was on active duty with the Air Force 4 1/2 years, and continued his service in the Air Force Reserve until his retirement with the  rank of colonel in 1973.

Holloway served as superintendent in several Michigan school districts between 1949 and 1967, and in Burnsville, Minn., from 1967 until 1975.  He was highly respected for his leadership in the educational community, for his development of innovative programs and a strong management style.

He also served as a visiting college professor at Mankato State College.

Following tenure as superintendent of Burnsville-Eagan-Savage District 191, he served as an educational consultant and, subsequently, as president of Sheldon Jackson College in Sitka from 1972-1982.

He was active in the Episcopal Church, serving as Sunday school teacher, choir director, chairman of the Bishops Committee and senior warden.

He also was active in the Rotary Club, Kiwanis Club and local Chambers of Commerce.

He received many honors throughout his career, and was particularly proud of receiving the nomination for the office of Superintendent of Public Instruction in Michigan twice, and of receiving the Worth McClure Fellowship for Advanced Studies, the Diplomat of the Academy of the American Association of School Administrators National Association of School Executives, and the AASA Academy Professional Development Award.