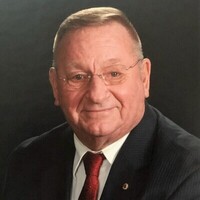 David Arthur Bennett, 80, died February 18, 2021, with his family by his side.
David was born January 26, 1941 in Lansing, Michigan to F. Raymond and Ellen (Nott) Bennett . He graduated from East Lansing High School in 1959. David served in the U.S. Navy HS-5 Helicopter Squadron from 1961-1963 and was part of the mission that picked up astronauts Alan B. Shepard and John Glenn. He worked for General Motors for 35 years.

He is survived by his loving wife of 55 years, Linda; daughter Amy (Marcus) Burnett; son Kurt (Rachel) Bennett; and grandchildren: Rachel, Mason, Addison, Annalise, Jacob, Lucas and Mallory. He was preceded in death by his parents and his sisters Christine Conlin and Marilyn Thornton.

David enjoyed being of service to others. He was a very active member of the Holt Lions Club since 1968. He served in many leadership roles with the Lions, including District Governor (1991-1992) and President of the Lions Foundation (1997). He was part of 10 eyeglass mission trips with the Lions to Peru, Honduras, and Latvia. He was President of Welcome Home for the Blind (1997) and President of the Methodist Children’s Home Society (2016-2020). He was also a very active member of Okemos Community Church and sang in their choir for 60 years.

Family was always the most important thing to David. He enjoyed spending time with his wife, children and grandchildren.

There will be a graveside service on Tuesday, February 23 at East Lawn Memory Gardens in Okemos at 1:00 p.m. David wanted his funeral at his church and the family will hold a memorial service in his honor at a later date when church renovations are completed.

In lieu of flowers, donations may be made to Lions of Michigan Foundation, 5730 Executive Drive, Lansing, MI 48911.