Mr. and Mrs. Lloyd Aseltine; Allan and Russell Aseltine, and Mr. and Mrs. Arnold Powell, all of Okemos, were visitors at Moody Bible Institute in Chicago during the school's recent summer commencement.  Mr. and Mrs. John L. Aseltine were members of the graduating class, which numbered 162 members.

Rev. John L. Aseltine, Ozark mountain missionary, will be the guest speaker at the Sunday Evening service of the Union tabernacle.

Reverend Aseltine is a graduate of Moody Bible Institute in Chicago, Ill., and for the past year has been engaged in missionary work in Missouri.  He is now visiting in Okemos, his former home.

Mrs. John Aseltine and baby are home at her parents, Mr. and Mrs. Arnold Powell, while her husband is at the Mayo brothers clinic for observation and treatment.  The Aseltines are serving a parish in the southern part of the country.

Rev. John Aseltine, a former resident here and a graduate of the Okemos school, has been ill with pneumonia at his home in Missouri.  His young daughter was also ill according to word received by his parents.

John loved the Lord and felt called to be a minister.  Lansing State Journal, Sunday, 21 November 1948 ran a brief resume on local, Meridian area, young people who had gone further afield than being farmers like their fathers.  "Choosing the ministry for his life's work, John Aseltine of Meridian received theological training at the Moody Bible institute.  Upon completion of his training he and his wife, the former Doris Powell, did four years of missionary work in the Ozark mountains.  For the past two years he has held a pastorate at Strickland, Mich."

John and Doris turned their eyes and hearts towards Africa and in 1950, with three young daughters in tow, left Michigan and sailed for French North Africa, later to be known as Algeria.  The Aseltines were affiliated and with the east coast mission board of African Christian Missions later called Evangelical Baptist Missions with headquarters in Patterson, New Jersey.

Political strife and unrest has not touched them but they have seen quite a bit of it.  The Aseltines are missionaries there. 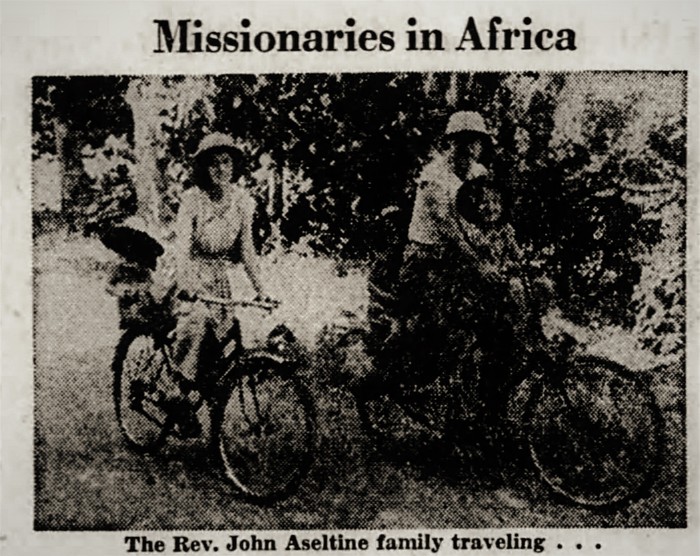 The Aseltines left Ingham county in January, 1950.  Three young daughters, Elizabeth, Rachael and Rebecca, went with their parents and last year a son, Paul, was born in Africa.

An attack of polio kept Mr. Aseltine hospitalized for many weeks in 1952 and in a state of convalescence for many more.  Not yet fully recovered, he is back at his work.

Mrs. Aseltine, the former Doris Powell, and Mr. Aseltine were both born in Ingham county and both graduated from the Okemos highs school and the Moody Bible institute (Chicago).

They expect to return on a visit next year.

AFRICA HAS MANY PROBLEMS

Meridian, June 11 - "Mau Mau terrorists and South African race discriminators may be getting the headlines in American papers but there are other, equally serious problems in Africa."

So says Rev. John Aseltine, home after 3 1/2 years as missionary in North Africa.  There the mixing of people of different races, languages, religions and cultures creates constant stress.

The French, nomads, city Aras and other Europeans are all concentrated into one civic group.  Struggle for political power is unceasing, says Mr. Aseltine, and Communists exploit unrest.  "Fortunately," he reports, "the Reds are less active than they were a year ago."

The Koranic teaching of the Arabs is being merged with western education in French government public schools.  Though many Arab youths attend these schools, they still maintain their old arts and crafts and Mrs. Aseltine has sample of fine work from native looms.

"The economic system creates a real challenge," believes the missionary.  "There are the very rich and the very poor with few in-between.  While some men amass a fortune in a few years, others work long hours for wages that barely mean subsistence."

"Government employees are well paid.  They include teachers and those working in government-owned utilities, transportation and factories.  Farmers belong to the rich class and have modern equipment.  Sometimes in the very same field you'll see new tractors and farm machines as well as oxen and day laborers working for unbelievably low wages."

The young Aseltine family had personal problems to meet, too.  Rev. Aseltine was severely stricken by polio last year at the same time his wife was seriously ill and hospitalized.  Their four children were cared for by missionary friends.

A two months rest in Switzerland improved the parents' health greatly.  After their current year's leave in America they will return to their work in Africa.

Williamston, Dec. 26 - Nobody in Michigan can possibly be enjoying this white Christmas any more than the family of Rev. John Aseltine.

The past three Christmases have been spent in Algeria where the Aseltines, Williamston natives, were missionaries.  Their young son and daughter are used to spending the whole year in sun suits; the change to snow and cold has them both open-eyed in amazement.

The Aseltines recall that last year their Yuletime was spent in tropical heat.  But they had a Christmas tree and the family sang carols to Mrs. Aseltine's accordion accompaniment.  Recordings of Christmas greetings from the States brought home closer to them and Arab friends paid calls during an open house.

The family has been home on leave since last May.  The pastor and his wife have been busy filling speaking engagements in Michigan and surrounding states and at the end of January he will go to the Pacific coast for a six weeks speaking tour.

The will return to their duties in Africa next June.

John and Doris did not return home for 8 years.  From 1954-1962 the long and brutal Algerian war for independence from France held the county in siege and constant upheaval.  It is estimated that up to one million Algerian nationals died during the struggle.  The Aseltines dealt with war, rumor of war and street battles continually.  They came home finally in 1962 exhausted.

OKEMOS FAMILY DUE BACK FROM ALGERIA

Mr. and Mrs. John Aseltine of Okemos, and their five children are returning from a mission in Tiaret, Algeria, and are expected to arrive home by July 1.

This will mark the family's first furlough in eight years, and they plan to remain in the United states from six months to a year.

Serving under the Evangelical Baptist Missions, Inc., the Aseltines have spent 12 years at the Algeria mission.  Mr. Aseltine is field director.  The couple conducts sewing, knitting and Bible classes for women and children in Tiaret, and also operates a Christian book store there.

Their largest project is a young people's camp.  they have cleared several acres of ground leased from the Algerian government and have hauled in barracks used when Orleansville was rebuilt.  A large tent also is used at the camp site.  French and Arab Christians have aided in this work.

Mr. and Mrs. Jacob Stauffer and family, who returned to Algeria a year ago, following a furlough home, will take the Aseltine's place while they are in the U.S.  Mrs. Stauffer and Mrs. Aseltine are the daughter of Mrs. Arnold (Esther) Powell of Okemos.  Mr. Aseltine is the son of Mr. and Mrs. Lloyd Aseltine, also of Okemos.  Their home church is the Okemos Baptist. 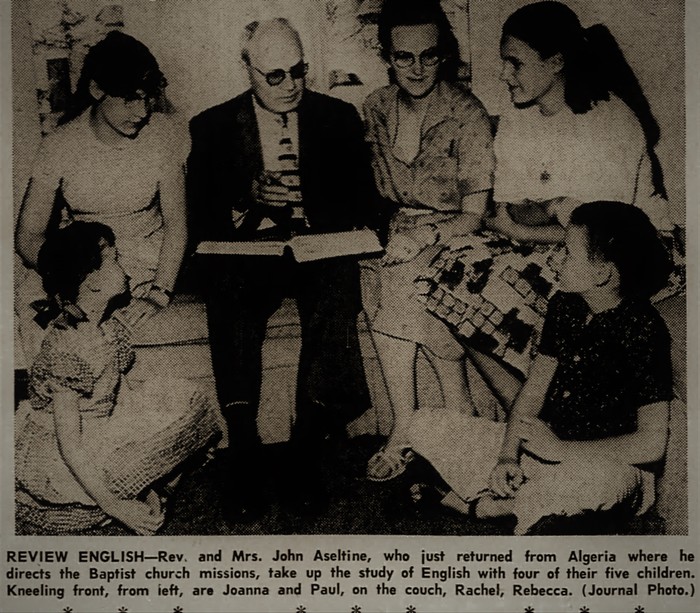 Another bloodbath for Algeria was seen possible today by a Baptist missionary from Okemos who spent the past 12 years in the strife-torn African nation.

Rev. John L. Aseltine returned to his hometown apprehensive about the future of the country he has come to love and weary from the effects of the 7 1/2-year war that just ended in Algeria.

"Things are much worse there than people think they are," Mr. Aseltine said.  "Because of censorship, only part of the truth has been released."

The 45-year-old director of Baptist missions in Algeria said a civil war will occur within the next three weeks if leftist-leaning Ahmed Ben Bella musters enough strength from the Algerian nationalist army away from Premier Yousef Ben Khedda.

"If the army is divided rather equally, then there will be blood-shed - very much," he said in a French accent he acquired while serving in Algeria.  "I think the population is fed up with war."

Mr. Aseltine, who returned to the United States with his wife and four of their five children July 21, said the Algerian people will follow the army, whichever way it goes.

'In case the political situation makes it necessary, I may have to go back before a year... but not with my family," he said at the parsonage of the First Baptist church of Okemos at 2049 Hamilton rd., where he and his family are staying.

Mr. Aseltine, his wife, Doris, and their children, Rachel, 16; Rebecca, 14; Paul, 10 and Joanna, 8, are looking for a home here.  Another daughter, Elizabeth, 19, stayed over in Marseilles, France, to complete her junior college exams.  She is expected to return to Okemos in about two weeks.

"We (the church) have property, we have interest in Algeria," Mr. Aseltine pointed out.  "I make all the contacts with government so it may be necessary for me to be there."

The 1935 Okemos high school graduate predicted dire economic troubles for independent Algeria, because most Europeans who controlled the wealth have fled and many public buildings have been destroyed during the French-nationalist war.

Casualty figures released by the French government in connection with the seven-year war are very low and the nationalist reports of 1,000,000 are high, he said.

Mr. Aseltine said Premier Ben Khedda has the support of Morocco, Tunisia and France and this may prevent a civil war, but Ben Bella may recruit help from President Nasser of Egypt or the Communists.

He and his family escaped unhurt when a gasoline bomb (Molotov cocktail) was hurled at their car once and another time he had to complete a phone call lying on the floor of his home in Tierat, Algeria, when a machine gun fight broke out on the street outside.

"We feel it (Algeria) is our home.  We intend to spend our lives there, if conditions allow us to.  It's a beautiful country," he added.

On Monday our readers learned of the services performed by the Rev. John Asletine and his wife Doris as Baptist missionaries in Algeria where they have spent 12 years, nearly eight of them under the dangerous condition resulting from the Algerian struggle for independence.

The Rev. Aseltine took his family to Algeria, which is predominantly Moslem, 12 years ago to found a center for Baptists.  After four years the couple came home for a rest leave and then returned to Algeria for another eight years.  After completing the current rest furlough at home in Okemos they plan to go back to Algeria for further service.

Because of Algeria's critical need for doctors, the Aseltines were able to help by teaching the people hygiene and precautionary health measures and Mrs. Aseltine led classes in knitting.

Noting that the Algerian uprising was a roadblock in their progress during eh eight years of civil strife, Mrs. Aseltine said that "when we go back next year we will have to work all the harder."

Within a short period of time after the December 1962 articles, John and Doris found they would be unable to continue their work in strife ridden Algeria.  They remained in the US for an extended period of time and then set sights on France where there were not only friends and contacts but numerous Algerians fleeing their native soil.  In 1970 John and Doris, very fluent in the French language, settled in Toulon, France and for the next several decades continued working for the Lord among Algerians and French nationals.  John died August 1999, Nice, France.  He was cremated and inurnment was in France.  Doris continued with their work until 2007 when she moved to back to Michigan due to health concerns.  Doris, born 3 November 1920, died at age 87, 25 November 2007.  She was interred Leek Cemetery, Okemos.  Part of John's ashes have been placed with Doris.