Emma Christina Niebling, daughter of Jacob Michael (1848 Germany - 1936) and Lizzie (Horning; maiden surname spelling on her death certificate) (1858-1940) Niebling, was born 20 January 1877, Washtenaw County, Michigan.  Emma was a baby when her parents moved to Okemos, Ingham County, Michigan and she received some of her formal education in the 2-story Okemos school. Emma then went on to high school in Lansing and to Michigan State Normal School, which first opened its doors in 1853.

Michigan had been a state only 12 years when the Michigan State Normal School was formed.  It was the 1st in Michigan and 1st normal school created outside the original 13 colonies.  It was modeled on the German education system and granted high school diplomas and teaching certificates to qualified students.  Emma attended and graduated with a teaching certificate in the 1890's.  The Ypsilanti school would morph into Michigan State Normal College (1899), Eastern Michigan College (1956) and finally into Eastern Michigan University (1959).

Emma, who never married, taught in Ingham County in and around Okemos and Williamston for 40 plus years.  She was first noted as an Okemos school teacher in 1912.

Emma taught in Locke Township, Ingham County, at a one room school house in the tiny forgotten town of Bell Oak.  Bell Oak was situated near the Livingston County line.

Miss Emma Neibling (note misspelling of surname), who closed her school at Bell Oak Tuesday, will spend the summer with her parents Mr. and Mrs. John Neibling of Okemos.

MAY FESTIVAL GIVEN BY OKEMOS CHILREN

The Okemos school is fast gaining recognition for its program of this type of education and the various displays planned and executed by the children were interesting.

A trip around the world, depicting interesting things about various countries and the furnishing of a pioneer cabin made the exhibit in the sixth grade, teacher, Emma Niebling.

After her father took his own life in 1936, Emma and her mother lived together on Hamilton Road in downtown Okemos.  Mrs. Niebling died in 1940.  Emma retired from teaching about 1945 but stayed busy in school and community activities.

Miss Emma Niebling is ill at her home on Hamilton road, Okemos.  Miss Niebling is a retired public school elementary teacher, having taught in various local schools for about 40 years.

Miss Emma Niebling, 83, the longest resident of the Okemos-Haslett area, died Friday at her Okemos home.

Miss Neibling, who was an Ingham county school teacher for more than 40 years, lived all but six weeks of her life in Ingham county.  She was born n Washtenaw county.

She was found dead in her bed when neighbors noticed her home was without lights Friday night.  Coroner Dorwin E. Hoffmeyer said she had been dead about 10 hours.  He attributed death to a stoke.

The Okemos-Haslett Kiwanis club honored Miss Niebling during the Okemos Centennial last summer as the resident who had lived in the greatest number of years in the area.

Miss Niebling was a graduate of the Old Ypsilanti State Normal college.  Her teaching assignments included Williamston and Okemos, where she retired 15 years ago.

She was a member of the Okemos Pioneer club and at the time of her death was financial secretary of Okemos Edwina Rebekah Lodge 20.

Rebekah services will be conducted at 1 p.m. Monday at the Gorsline-Runciman funeral home.

She is survived by a brother, William of Okemos and a niece, Mrs. Lucile Edwards of Lexington, Ky.

Burial will be in Glendale cemetery. 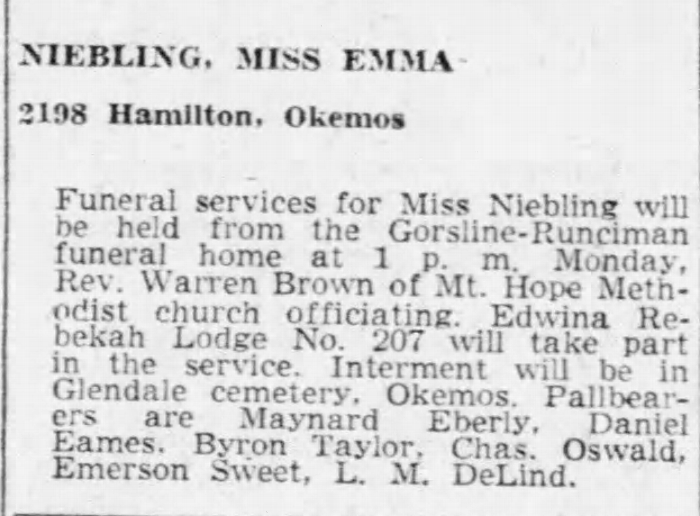